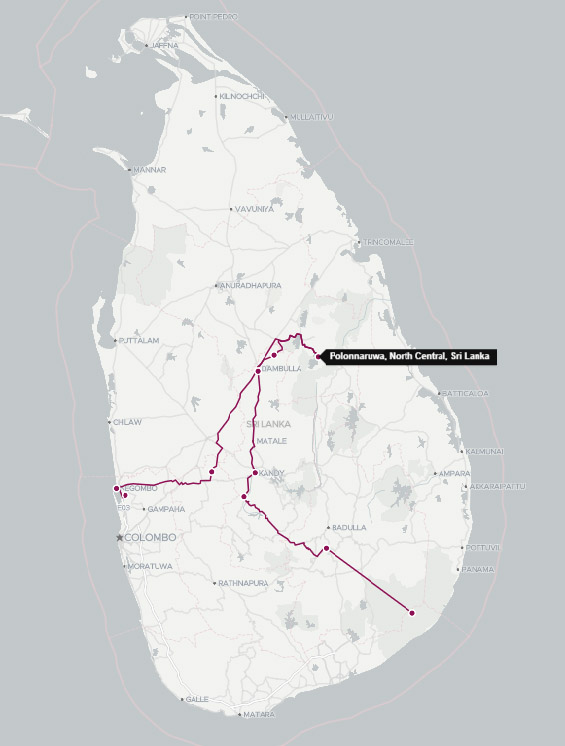 You may choose to spend more time on the beach in Sri Lanka or spend a last night in Colombo. Also Sri Lanka can easily be combined with the Maldives, less than an hour’s flight away, and boasting some of the world’s finest beach resorts. Alternatively, Sri Lanka’s closest neighbour, India, offers a host of attractions, including the world famous Taj Mahal. It is also possible to combine Sri Lanka with Dubai or some of the other Gulf States and South East Asia.

Meet on arrival at Bandaranayke International Airport by Our Representative and transfer to Negombo – Check in at Hotel – Rest of the day at leisure – Overnight stay at Hotel.

Breakfast at Hotel – Leave for Dambulla or Sigiriya en route visit the Elephant Orphanage in Pinnawela - This orphanage is the home for about 89 elephants, out of which some are baby elephants found abandoned or orphaned in the wild. They are being cared, fed and trained by the wild life authorities. The best time to visit is during the feeding times, when one will have the opportunity of seeing the baby elephants being bottle-fed. Also could accompany the elephants to a river close-by and see them having their daily bath – Afternoon Climb the 5th century Sigiriya rock fortress which is a world heritage site, built by King Kashyapa (477-495 AD). The ‘Lion Rock’ is a citadel of unusual beauty rising 200 meters from the scrub jungle. The rock was the innermost stronghold of the 70 hectare fortified town. A moat, rampart, and extensive gardens including the renowned water gardens ring the base of the rock. Visit the world-renowned frescoes of the ‘Heavenly Maidens’ of Sigiriya, which are in a sheltered pocket of the rock approached by a spiral stairway. These frescoes are painted in earth pigments on plaster – Check in at Hotel – Overnight stay at Hotel.

Breakfast at Hotel – Leave for Polonnaruwa - Visit Polonnaruwa- Which was the 2nd capital city of Sri Lanka, built in the 11th and 12th centuries AD, and which is a world heritage site - Here you can see the ruins of the Royal Palace, the Gal Viharaya – where 4 splendid statues of the Buddha in ‘Upright’, ‘Sedentary’ and ‘Recumbent’ postures carved out of rock, the Audience Hall, the Lotus Bath, king Parakramabahu’s statue, and the Parakrama Samudraya lake built by King Parakramabahu the great. There are also monuments of famous places of worship such as the Shiva Temple, the Lankathilake, the Watadage, the Galpotha, the Kiri Vehera and the remains of a former Temple of the Tooth Relic - Return to hotel for overnight stay.

Breakfast at Hotel – Leave for Kandy en route visit the Dambulla Rock Temple. Climb up to the temple, which was donated by king Walagambahu in the 1st century BC to Buddhist monks. Dambulla is a World Heritage site and is the most impressive of Sri Lanka’s cave temples. The complex of five caves with over 2000 sq. meters of painted walls and the ceiling is the largest area of paintings found in the world. These caves contain over 150 images of the Buddha of which the largest is the colossal figure of the Buddha carved out of rock spanning 14 meters and a spice garden in Matale, to see the different spices, which Sri Lanka is famous for. You will be introduced to different spices and shown how some of these spices are grown and processed – Check in at Hotel – In the evening visit the Temple of the Tooth Relic and thereafter witness a cultural show featuring traditional Sri Lankan dancing - Return to hotel for overnight stay.

Breakfast at Hotel - Morning proceed on a sightseeing tour of Kandy visit the Peradeniya Botanical Gardens. This botanical garden was first built as a pleasure garden by a Sinhala king and was expanded by the British. It is 147 acres in extent and provides an amazing variety of trees, plants and flowers - Kandy was the last capital of the Sri Lankan kings, and is a World Heritage Site. The name Kandy conjures visions of splendor and magnificence. Many of the legends, traditions and folklore are still lovingly kept alive. Drive around the Kandy Lake built by the last Sinhala king Sri Wickrama Rajasinghe in 1798. Visit the Kandy town and Bazaar, the arts & crafts centre and a gem museum and a lapidary – Return to Hotel – Rest of the day at leisure – Overnight stay at Hotel.

Breakfast at Hotel – Leave for Nuwara Eliya en route visit a tea plantation and a tea factory, where the best tea in the world is produced. You will be told all about the process of manufacturing tea. You can also see how tea is graded. Taste a cup of pure Ceylon tea in the factory - On completion, proceed to Nuwara Eliya, because of its invigorating mountain climate and scenery, is Sri Lanka’s most popular hill resort. Nuwara Eliya is also the heart of Sri Lanka’s tea country producing a significant share of the world’s best tea. Sri Lanka’s highest mountain Pidurutalagala (8282 feet) is located here. Nuwara-Eliya also has one of the finest 18 hole golf courses in South Asia - Check in at Hotel – Evening leave on a sightseeing tour of Nuwara Eliya - Drive through "Little England” - Return to the hotel for overnight stay.

Breakfast at Hotel – Leave for respective Beach resort up to Colombo en route visit Galle Dutch Fortress – Drop at Beach Resort or proceed to Airport to connect with your departure flight.

Kandy Perahera Supplement; please note that if the stay at Kandy is coinciding with the Kandy Festival Season (Dates are to be advised) a supplement to be added (Prices are variable hotel to hotel)

Other Tours in Sri Lanka