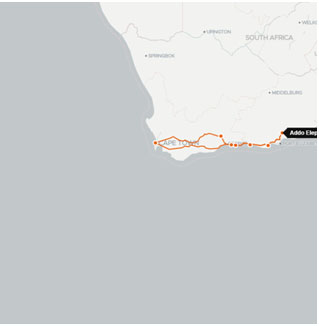 Discover all that South African holidays have to offer with life-changing luxury safaris, city escapes, sunny surfing spots, indulgent wine tours and more. South Africa is known as ‘a world in one country’and when you visit, you’ll understand why. Hike one of the world’s seven new wonders; Table Mountain, search for the big five on a safari in Kruger National Park and see the best of South Africa’s impressive mountain scenery, spectacular gorges and breathtaking coastlines along the infamous South Africa Garden Route tour.

On arrival at Cape Town transfer to Hilton Double Tree Hotel – Over night.

Paddle through the staggering scenery and abundant bird life of the Wilderness region. Wilderness features 18 kilometres of beaches cooled by sea spray, 5 lakes, 5 rivers, and 2 estuaries. Canoe in the beautiful Wilderness region (either at Kaaimans or Touws river) and watch the bird life while gliding over the water in a pure encounter with nature.

Duration: 45 minutes
Stop At: Sedgefield Lagoon Mouth, 69 Kingfisher Drive Myoli Beach, Sedgefield, Knysna 6573 South Africa For those that savour a great night’s sleep, tonight’s end destination – the coastal town of Sedgefield or Knysna – promises just that. Sedgefield is a tranquil village and boasts the title of Africa’s slowest town. Here, life in the slow lane is the way of life. Feel the white sand between your toes. Venture into town for a more intimate dinner if your accommodation is near Wilderness or Knysna

Duration: 1 hour
No meals included on this day.
Accommodation included: Overnight in Sedgefield and Knysna at Afrovibe Backpackers or 3-star Graywood or 4-star Knysna Quays Hotel or similar.

Stop At: Knysna Heads, Coney Glen Road, Knysna 6571 South Africa Pristine wild and adventure go hand in hand on this adrenaline-packed day. From a morning spent admiring the views from the imposing Knysna Heads to ocean and river views atop Bloukrans Bridge, the world’s highest commercial bridge bungy jump and ziplining over a gushing river gorge in the Tsitsikamma forest before you get 'me-time' to traverse more lush forests via suspension bridges and hiking trails in Tsitsikamma National Park. From birding to game spotting and waterfall chasing; your Tsitsikamma to-do list will be absolutely jam-packed. Walk along walkways to soak in the views of Knysna from the imposing sandstone Knysna Heads nestled between forested mountains and the sea, and curving around a big lagoon.
Duration: 30 minutes
Stop At: Bloukrans Bridge, South Africa Choose to either bungy jump, zipline over waterfalls or explore the surrounding forests for your fix of adrenaline. The bungy bridge itself is fairly unassuming as you drive over it, but it’s pretty apparent from the squeals and screams that this isn’t your average photo stop. The thrills don’t start when you jump, they begin as you zip line your way out to the jumping platform underneath the colossal bridge. Here, seemingly normal people hurtle face first down the 216m drop only to spring back up on their elastic cord like a yo-yo. So if you're feeling daring, why not face your fears and have a go?

Duration: 3 hours
Stop At: Zipline Tour - Tsitsikamma, N2 Tsitsikamma, Tsitsikamma, 6308, South Africa Zipline through dramatic scenery and over waterfalls in the Tsitsikamma forest. Multiple slides, of which the longest is 211 meters, zigzag along cables across the river gorge, as high as 50 meters above the water in some places (optional activity at own expense).

This region is a playground for the outdoors, and for those who'd prefer to keep their feet on solid ground a visit to the lush forests of the Tsitsikamma area provides the requisite photo opportunity (optional activity at own expense).
Duration: 45 minutes
Stop At: Tsitsikamma National Park, N2, South Africa As you head to the coastal belt, paradise-like towns such as Plettenberg Bay show why it and the Tsitsikamma National Park are favourites with holidaying locals aplenty. The short but steep walk to Tsitsikamma’s suspension bridge is worth it for the views alone and you’ll likely get a thrill as fellow explorers test its swing factor.
Duration: 2 hours

Stop At: Parque Nacional dos Elefantes Addo, Addo Elephant National Park South Africa A pre-dawn wake-up call might seem hard to take at first, but trust me, it’s worth getting an early start for your Addo game drive to see even more wildlife as the bush awakes. Your guide will use their experience to pinpoint the whereabouts of the park’s big game animals while deftly navigating the maze of dusty dirt roads in search of the Big Five. You'll experience an included ±3 hour game drive in the tour bus. The original elephant section of the park was dedicated to providing a safe haven for the few wild elephants that survived government-sponsored culling in the early 20th century. The lush vegetation provides protection and a rich food source, supporting what is now the most densely populated area of wild elephants on the planet. This finely tuned ecosystem is a sanctuary to over 550 elephants, lions, buffalo, black rhino, spotted hyena, leopard, a variety of antelope and zebra and other species.
Duration: 2 hours
Stop At: Jeffreys Bay Tourism, 17 Da Gama Road, Jeffreys Bay 6330 South Africa The early morning start means free time in the afternoon and J’Bay’s surf shop village – with its discount outlets – is perfect for shopaholics. But, if you’ve always fancied learning to surf (optional activity at own expense), then this town or the sand slopes beyond it are the places to try surfing or sandboarding (optional activity at own expense) or just chill out on the beach. You can rent surfboards and wetsuits for an additional fee.
Duration: 3 hours
Meals included: • Breakfast
Accommodation included: Overnight in Jeffreys Bay at Island Vibe Backpackers, 3-star Mandyville or 4-star On the Beach Guesthouse.

Stop At: Cango Ostrich Show Farm, Oudtshoorn 6620 South Africa South Africa delivers on its contrasts with landscape and lifestyle as you leave the Indian Ocean shoreline behind and wind your way through the Langkloof Mountains to the arid lands of the Klein Karoo. Here, the ostrich reigns supreme. Bird-filled paddocks line the highway with colourful feather stalls and show farms around every corner as you head into Oudtshoorn. The palatial sandstone homesteads stand tall, harking back to an era when ostrich feathers were worth more than gold. A visit to the Cango Ostrich Show Farm gives you a glimpse into the farming industry, allowing you to observe the world’s biggest bird beak-to-beak.
Duration: 30 minutes

Stop At: The Cango Caves, 328 Approximately 30km (19 miles) from town on the R, Oudtshoorn 6625 South Africa Now it's time to delve deep underground into the magical Cango Caves' limestone chambers, alive with drip formation stalactites and stalagmites and remnants of Khoikhoi paintings. Opt for the easy-going Heritage Tour to test the cave’s acoustics and gain insights into the formation and dripstone evolution. Or, by contrast, the Adventure Tour allows would-be contortionists to squeeze, twist and wiggle their way through limestone chimneys on a rather more adventurous underground route. Duration: 1 hour Stop At: Buffelsdrift Game Lodge - Activities, Cango Caves Road, Oudtshoorn 6620 South Africa Subject to availability, return to the wild for an optional 4x4 game drive with a knowledgeable game ranger at Buffelsdrift Private Game Reserve for a possible sighting of resident rhino and giraffe (optional activity at own expense).

Stop At: Oudtshoorn, 6620, Western Cape, South Africa, Oudtshoorn, 6625, South Africa Oudtshoorn hospitality is second-to-none, and the serving sizes are generous. Ostrich steak or kebabs complete the experience for those with an adventurous appetite. If you have the chance to try the Karoo lamb or local ostrich, don’t be shy – they are delicious.

Buffelsdrift Game Lodge - Activities, Cango Caves Road, Oudtshoorn 6620 South Africa As dawn breaks in Oudtshoorn, South Africa’s sunniest town, join an optional stroll with rescued elephants along the waterhole dam wall at the Buffelsdrift Private Game Reserve. Gentle giants, Jabari, Malaika and Bulelo made this their home after their parents were poached in the north of South Africa. This experience will have you following in their massive footsteps - a unique way to observe the world’s biggest land mammal as you leisurely stroll with the gentle giants (optional activity at own expense).

Stop At: Boplaas Garden Route Tasting Room, Klipheuwel Farm, Klein Brak River, Garden Route Drive on the N2 – between Mosselbay & George, Klein Brak River South Africa After your morning adventure, it’s time to head back to Cape Town along the famous Route 62, modelled after America’s Route 66, but with a distinctly local flavour. Route 62 is more than just burgers and beers, farm stalls or small country towns, the highway is also the longest wine route in the Western Cape. Oenophiles will be in their element with a wine pit stop to sample Port-style wines en route to Cape Town. On arraival transfer to Hotel Hilton Double Tree. Over night in the Hotel

After Breakfast transfer to Cape Town Airport for your flight Home.

Other Tours in South Africa