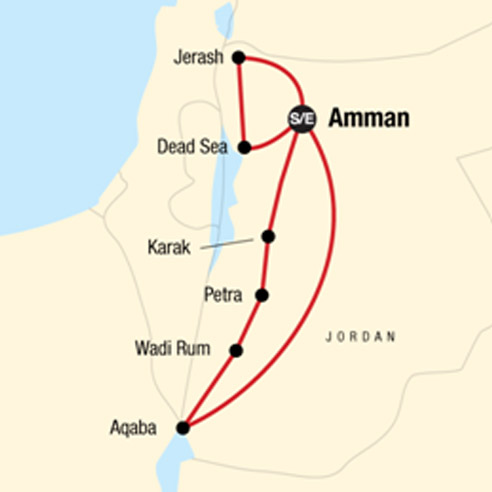 TOUR HIGHLIGHTS:
Departure every Sunday and Return every Saturday
(For any other dates please call us on 0203 5192 633)

Meet & assist upon Arrival to Q.AIA Airport, Transfer to Amman Check in at your hotel and overnight.

After breakfast, a full day visit starting with Pella, one of the most ancient towns in the world and a favorite of archeologists. Pella is exceptionally rich in antiquities, some of which are exceedingly old.. Um Qais is one of the most brilliant ancient Greco-Roman cities of the Decapolis. Umm Qais boasts impressive ancient remains, such as the stunning black basalt theatre lined with shops, an underground mausoleum, two baths, a nymphaeum, a city gate and the faint outlines of what was a massive hippodrome. Drive to hotel in Amman for overnight.

After breakfast, a full day visit of Jerash, ‘the Jewel of the North’ years. The city's golden age came under Roman rule and the site is now generally acknowledged to be one of the best-preserved Roman provincial towns in the world. Fountains and city walls pierced by towers and gates. Continue to the Dead Sea, one of the most spectacular natural and spiritual landscapes in the world and the lowest point on Earth. Although sparsely populated and serenely quiet now, the area is believed to have been home to five Biblical cities: Sodom, Gomorrah, Adman, Zebouin and Zoar (Bela). Return to the hotel in Amman for overnight.

After breakfast, drive along the 2000 year old Kings Highway; the ancient road mentioned in the Bible, which links prehistoric villages from the Stone Age and biblical towns. Stop at Madaba, ‘The City of Mosaics’; 30km south of Amman. Visit the town’s main attraction, the Greek Orthodox Church of St. George where the famous 6th Century Byzantine mosaic map of the Holy Land and other biblical sites is found.

After breakfast, a full day visit of the “Rose Red City” of Petra - a treasure of the ancient world. Celebrating in 2012 the 200th year of its rediscovery, the ancient Nabatean city of Petra was recently voted as one of the Seven Wonders of the World. It is without a doubt Jordan’s most valuable treasure and greatest tourist attraction. In 1985 Petra was designated a UNESCO World Heritage Site. Begin your visit by enjoying a walk or a short horse ride from Petra’s main entrance to the entrance of the old city through the “Siq”, which is a 1210 meters long narrow canyon. As you reach the end of the Siq, the first and greatest monument of Petra slowly comes into view - this is the famous Treasury monument “Al Khazneh”. Petra is an extraordinary and unique place, which was built by the Arab Nabatean more than 2000 years ago. The Nabatean carved their monumental tombs, palaces, temples and treasury from the desert’s natural rose-colored rocks and sandstones. Petra was an important junction for the silk, spice and other trade routes that linked the Eastern world with that of the West. Indulge yourself, and allow our professional guide to walk you through the architectural and spiritual wonders of this majestic place explaining every detail. Overnight at hotel in Petra.

After breakfast, drive only 10mins to visit Little Petra, ‘Al-Beidha’ an important suburb of the City of Petra. You enter the site through a narrow gorge called Siq al-Barid, the "cold Siq". The name refers to the circumstance that the high walls prevent sunlight from entering the canyon and warming it. The Siq is 350 meters long with three wider areas inside. It is believed Little Petra was an important suburb of Petra, being the entry and exit point for the trade routes to the north and north-west. Here the caravans from the Negev, Gaza, Jerusalem, Egypt and the Mediterranean coast arrived, had a rest and engaged in trade. Like in Petra, buildings had been carved into the sandstone, used as residences, storages and tombs, with water channels and cisterns. In one of the buildings you can find the remains of painted frescoes with birds, grapes and flowers, dating back to the 1st century AD. Continue to Wadi Rum, Jordan’s vast and echoing desert, for a 4x4 jeep ride. Stunning in its natural beauty, Wadi Rum epitomizes the romance of the desert. With its "moonscape" of ancient valleys and towering sandstone mountains rising out of the sand, Wadi Rum is also home to several Bedouin tribes who live in scattered camps throughout the area. Climbers are especially attracted to Wadi Rum because of its sheer granite and sandstone cliffs, while hikers enjoy its vast empty spaces. Wadi Rum is probably best known because of its connection with the enigmatic British officer T.E. Lawrence, who was based here during the Great Arab Revolt of 1917-18. Much of David Lean’s Lawrence of Arabia was filmed in Wadi Rum. Return to Amman for overnight.

After breakfast, transfer to Q.AI Airport with our full assistant with all airport procedures and formalities via Customs & Emigration. End of Services 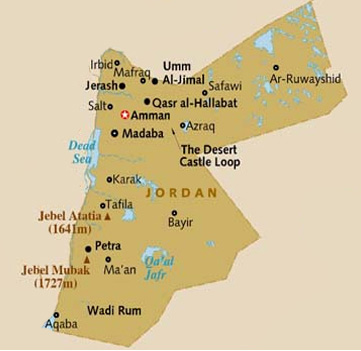 Other Tours in Jordan