Both deeply traditional and very modern, China has been the subject of endless fascination for centuries. Each year, travellers from around the world visit its many cities, in which they create the memories of a lifetime. The diverse and vast territory of China guarantee one-of-a-kind experiences, and its appeal lies in its scope for endless discovery. From the spectacular landscapes of Yanshou and Guilin, to the colourful, boisterous cities of Shanghai and Beijing, its impressive architecture, natural beauty and diversified culture make it an ideal holiday destination for essentially anyone.

Many tourists are intrigued by the history of China's 5,000-year-old civilisation. This history is best experienced through the country's monuments, museums and landmarks, from Beijing's Forbidden City to the country's famous Great Wall. History enthusiasts from throughout the world are pleased with the limitless number of attractions and monuments available for viewing throughout the country. 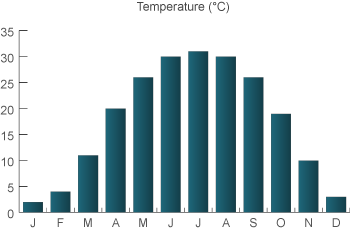 Attractions for the Adventurous

A broad range of must-see landmarks appeal to the adventurous traveller as well, such as the former capitals of Kaifung and Luoyang, the Buddhist Caves at Dunhuang, and the Taklamakan Desert. Of course, the Great Wall of China deserves a place on every visitor's itinerary, as it is one of the world's most mesmerising attractions that never loses its mystique.

The Terracotta Army Museum is known for its grandiose size and famous sculptures, portraits and photos. Another world-class establishment featuring both modern works and ancient artefacts is the Shanghai Museum, which always ranks high among holidaymakers from around the world. The National Museum in the Mainland is home to displays of pottery, porcelain, handcrafted garments and stunning portraits. The Museum of Han Yangling and the Shaanxi Museum of History are also great choices for tourists, both of which are conveniently located near the city of Xian.

Travellers seeking a glimpse of China's daily life should consider a slower-paced itinerary that allows time to explore the city's public parks, temples, traditional teahousees and shops in a leisurely fashion. Meandering through the streets and alleys of famous cities in China offers travellers a chance to witness traditional life in this interesting country, rather than simply visiting major tourist sites.

For example, an unplanned itinerary allows for frequent pauses to experience true Chinese culture, such as listening to a street busker playing a two-stringed erhu, taking a picture of one of China's many plum blossom courtyards, or simply shopping for unique souvenirs and indulging in a delicious cup of Chinese tea.

Chinese cuisine is popular the world over, and almost all visitors find such food delicious and tantalising. Whether one prefers a steaming bowl of Lanzhou noodles, Peking Duck or deliciously seasoned hunan fare and dim sum, few travellers are disappointed with the outstanding dining options found in China.

China is also a wonderful country in which to indulge in a broad range of entertainment options. One can visit the impressive Beijing Opera, the Capital Theatre, The China Grand Theatre or the Liyuan Playhouse, the latter of which is located inside the country's famous Qiamen Hotel.

Additionally, China is home to some of the world's best circuses and acrobatic performances, which can be found in almost any part of the country. Most performances of this kind are designed for tourists and are ideal for families with children.

Smaller theatres and clubs also offer concerts, plays and other types of entertainment, and most major cities in China are home to a thriving nightlife. Those who enjoy polo and horse racing should consider visiting Inner Mongolia and Tibet, where events of this type are frequently held.

Whether one is an adventure traveller, museum-goer, entertainment seeker, foodie or traditional sightseer, he or she will find that China's diversity is second to none.

Tourist and family visit visa (L-visa) is issued to a foreign citizen who comes to China for tourist purpose, family visit or other personal affairs.